UXP has updated the Manifest to version 5. We’ll see what’s new, what’s changed, how to deal with your plugins’ code and users. I’m going to summarize the most salient/tricky points, and link the relevant documentation for you to dig deeper.

Prerequisites and the CC Marketplace

Manifest v5 is officially supported since Photoshop 2022 (version 23.3.0), that sports UXP v6.0.2. Developers are allowed to submit Manifest v5 based plugins in the CC Marketplace, and users can install them provided that they’ve got Creative Cloud Desktop v5.7.

What happens when you push an updated version of your UXP plugin with Manifest v5 to the CC Marketplace? It depends on what users currently have installed in their system.

In other words, the CC Marketplace doesn’t work like the Apple Store, where you’re deployed the latest product version that is compatible with your system. Here, only the latest product is made available, and users must keep up with the minimum requirements if they want to get it.

With the Manifest v5 you can unlock all the new Photoshop Scripting API features currently available; they’re documented in the Adobe Developer website (see the changelog).

They’re not on by default, though: you must explicitly declare to use the Photoshop API v2 in the manifest.json.

You can still set "apiVersion" to 1 if you want, but you’ll get a warning message in the Console and, most importantly, you’ll miss all the new PS Scripting features1.

Speaking of Photoshop Scripting, among all the DOM additions the one API v2 feature that is going to have the biggest impact (and by far) on your existing code is the new requirement to put Photoshop in a Modal State when some operations are performed. Quoting the official documentation:

(it) is needed when a plugin wants to make modifications to the Photoshop state. This includes scenarios where the plugin creates or modify documents, or the plugin wishes to update UI or preference state.

When Photoshop is in a modal state, some menus are disabled and the script steals the host application’s attention, so to speak; very little interaction is then allowed.

For which operations is the modal state now required? An annoyingly lot of them, you’d be tempted to instinctively reply, e.g. when:

What in API v1 used to work out-of-the-box, may now throw "Uncaught Error: Event: <whatever> may modify the state of Photoshop. Such events are only allowed from inside a modal scope".

How do you create such modal scope then? With the mighty executeAsModal() function, with which you’re going to wrap all offending calls. This is a very basic example:

As a bonus, if the code you’re running takes more than 2 seconds to complete, a progress bar pops up by default.

In fact, the whole rationale is to give users a way to interrupt tasks if/when needed. The function’s signature is:

In my example I’ve used an anonymous (and asynchrohous) targetFunction inline; executeAsModal() itself returns a promise, hence you may want to use await2 in front of it.

The targetFunction in turn receives two objects as parameters (that I won’t mention here for simplicity’s sake), while in the options object the only required property is commandName, that defines the string that appears in the progress bar popup.

I strongly encourage you to read the whole content of its documentation page, as executeAsModal()—when you get over the initial annoyance—is extremely powerful. I won’t cover every feature in detail here, but let me mention that among the rest you can use it to:

If you’re wondering, API v2 also include suspendHistory() (see the documentation) which is a simpler wrapper for executeAsModal().

The Manifest v5 introduces a new "requiredPermissions" property, that may look something like this:

The best documentation for each one of the properties at the moment of this writing is found in this article by Padma Krishnamoorthy; I’ll leave it to her for the technical details, let me cover the bird-eye view here.

In case you haven’t noticed yet, the UXP team takes the concepts of Users’ trust and consent quite seriously. In this spirit, in the Manifest you’re going to declare upfront what kind of permissions your plugin needs, e.g. to open a website, read the clipboard, mess with the Filesystem, etc. Eventually, this information is going to be displayed in your plugin’s CC Marketplace product page—not yet, but they plan to—in order to give users full disclosure about the ways your plugin will interact with their system. I suggest to keep extra permissions at minimum, and include only the ones you really need.

Be also aware that, in addition to the permissions that you have to generically declare in the Manifest (I want to access "https" URLs, I need to open ".pdf" files), a “Request for Permission” popup will open anyway when you reach out for that specific https address, or that specific pdf file. 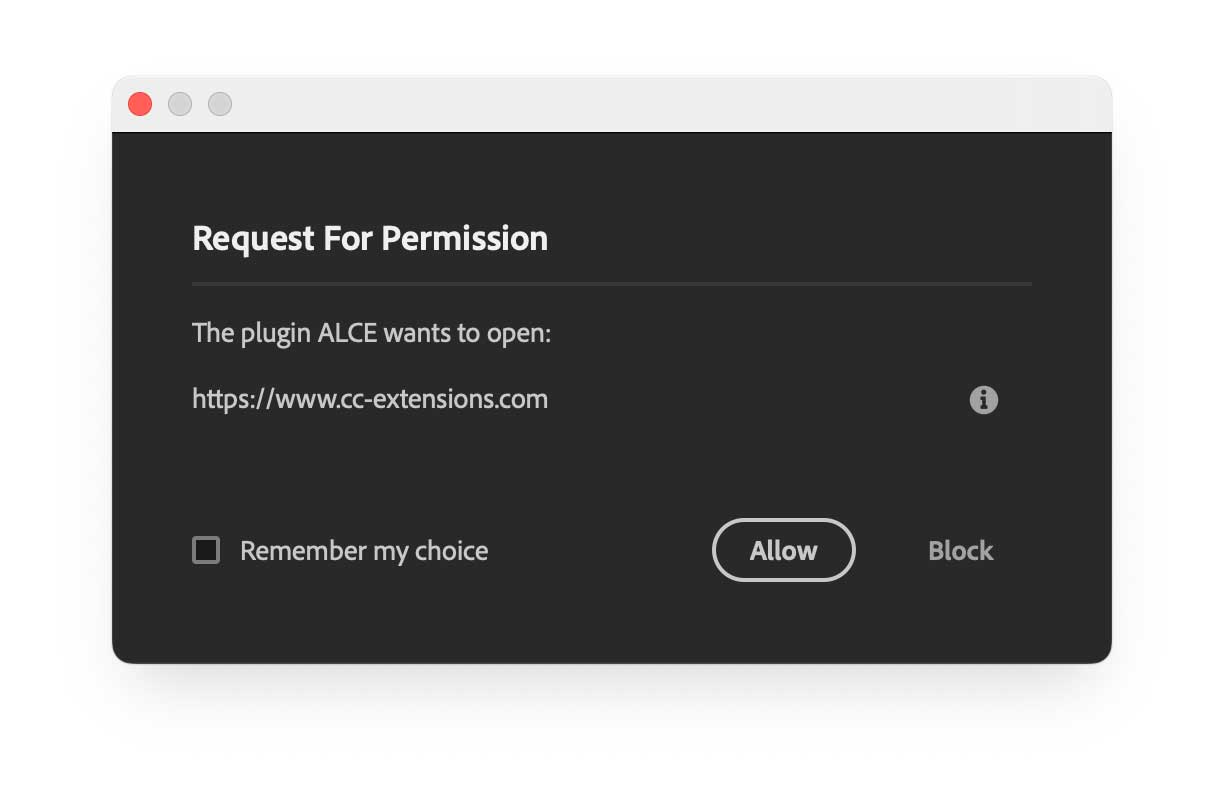 This way users can grant access to, and are exactly informed about, the exact resource your plugin is dealing with.

Finally, there’s one little detail in the Manifest v5 transition that is able to crash your plugin, and it boils down to the different parameter received by the show() function in the panel’s entrypoints.

In Manifest v4 plugins, show() used to receive an object with a node property: the HTML <body> that very likely you’ve always used to .appendChild() a <div> to.

In Manifest v5 UXP plugins there’s no need to access the node property, the <body> is received directly:

As far as I know this has still to be fixed e.g. in the UXP Developer Tool’s React template (in which case, find line 44 and substitute event.node with event and it’ll work back as normal).

git checkout -b manifest5 and be happy 😄.

Stay safe, get the Nth vaccine shot if/when you can – bye!