As a last example of my CCC Sharpening lecture in October, I did a correction of an underwater image. Later, I’ve been solicited with a very gentle email to show once again all the steps, and I asked my dear friend the photographer Davide D’Angelo: he kindly got me in touch with his colleague the underwater photographer Paolo Fossati, author of the picture I’ll show throughout this post. Thanks so much to both of you! So here it is, a little sharpening case study. 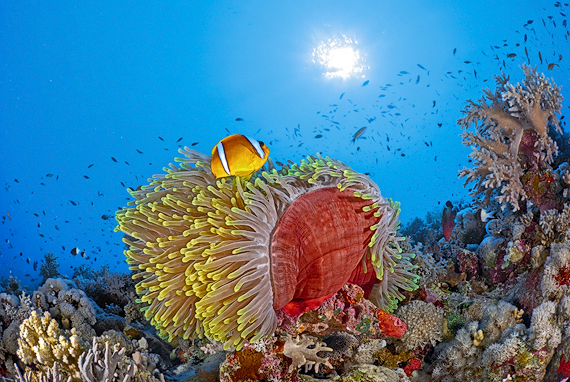 The original file comes as a RAW file from Nikon D80 (3872 x 2592 px just to keep in context the sharpening radii that I’ll be using), and as far as I’ve been able to understand from my Google quest, it depicts an actinia (the red thing with tentacles) in good company of an anemonefish (the yellow Nemo). The picture comes from Paolo Fossati’s trip in the Arabian Seven Reef (full gallery page). Even though, compared to the CCC, I’ve some more room here to explain what I’m doing, I will take for granted some basic color correction terms and tools for the brevity’s sake. 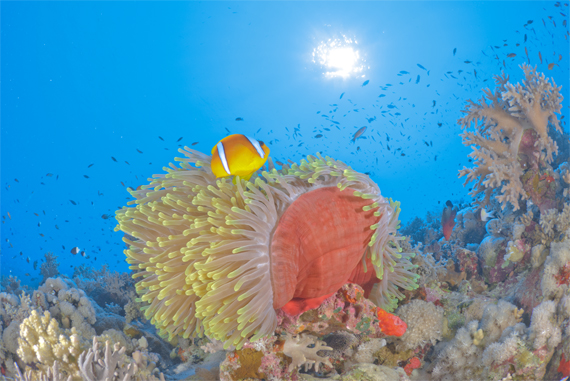 I’ve to admit that I’ve zero experience with this kind of naturalistic images, while Davide D’Angelo knows certainly better than me their (many) pitfalls: besides his works on stage in theaters and as an IR landscape photographer, he’s used to scuba diving as well, so he’s acquired peculiar skills for underwater photography retouching. 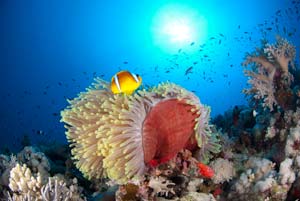 On my CCC lecture I worked on a different (and a lot easier) image, so I could show the steps for the color correction part too. Here the original is trickier and, believe me I don’t tell this to hide any secret sauce at all, I can’t exactly replicate (nor I exactly remember) how on earth I got to the intermediate version – the one that will be my base for the sharpening moves. Although, you may agree that the default ACR conversion is utterly different both from the zeroed version above (which was my actual starting point) and my intermediate result. Basically, the correction steps involved:

One of the color correction basic rules (neutral shadows) is less mandatory here perhaps – everything is drowned in deep blue, except for the area hit by the flash light in the foreground. Moreover, I’ve never been undersea (nor I will) so I haven’t the faintest idea of what these creatures would look like to a scuba diver approaching them. 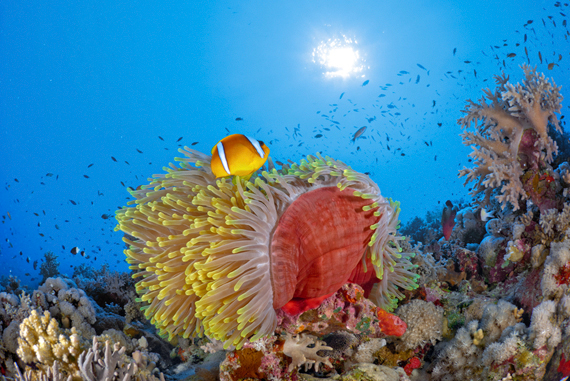 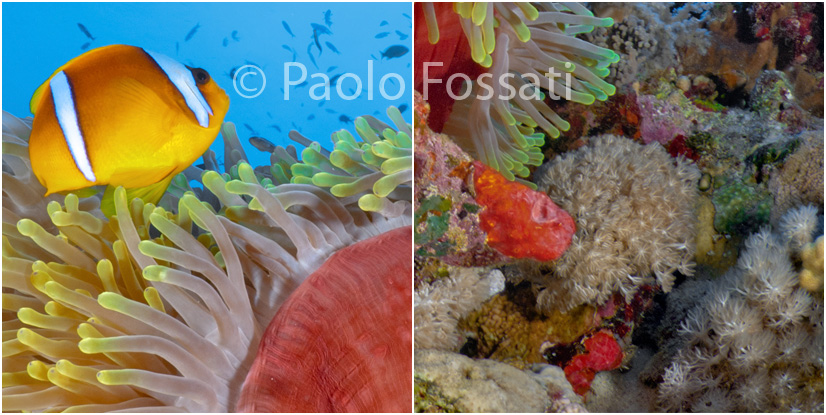 That said, my intermediate version is maybe a little bit… too colorful, but it’s not that bad anyway, at least in my opinion. If you’re interested in comparing retoucher’s styles, have a look to the Paolo Fossati / Davide D’Angelo version – more “dramatic” and 3D, if you will. I’ve been less “photographic” and more “descriptive” perhaps – it may remind you the esthetic of some New Guinea paradise bird watercolors from the 18th century, if that wouldn’t sound totally crazy.

Now the time to plan our sharpening strategy has come. Generally speaking I’d like to affect less the blue water than the animals to keep the focus on them, so while we’re in Lab the b channel (blue/yellow opposites) may work as a good mask. An HiRaLoAm (High Radius Low Amount) pass can’t hurt, so you may:

Yes! It looks like crap! Just don’t worry, because:

Since a layer mask is involved, I prefer to beat hard with the filter – then, afterwards, lower the opacity to taste. You’ve more flexibility this way, in my opinion.
The sharpening went to the L channel alone, to avoid any bad, bad color shift.
There’s still a problem – the water has gained too contrast and it’s distracting, not to mention the lighter halos around small fishes. So as we said before:

The Blending Options are a way to restrict the effect of a layer (no matter which kind of layer), depending on its content or the content of the layer beneath it. The Blend If acts as a threshold: first you select which channel to use as a base, then click and drag the slider (or ALT+click to separate the slider creating a smooth transition) to define if and where the upper layer visibility will be cut, depending on the channels range the sliders don’t encompass. 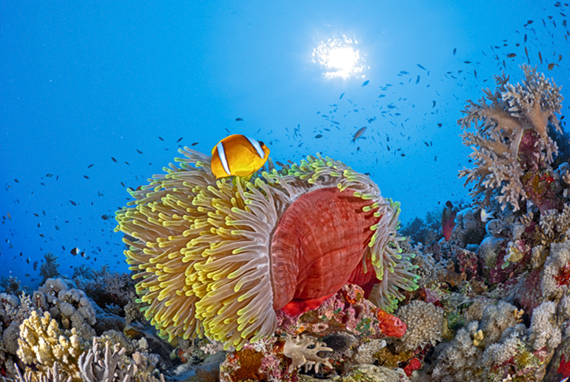 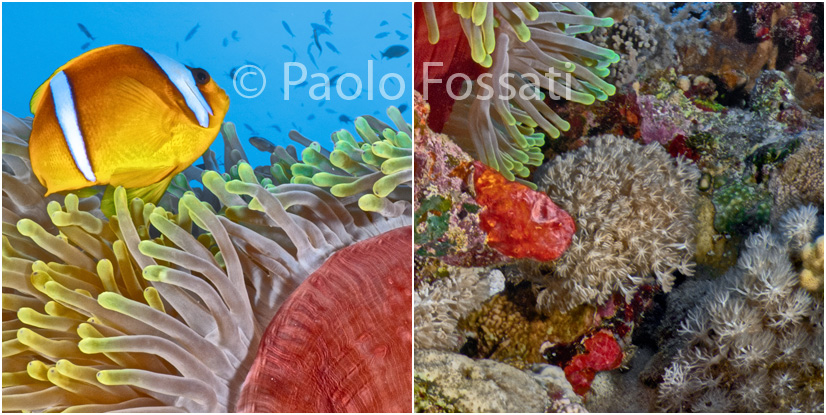 Ok, pause. So far I’ve corrected the color with some unrepeatable moves, and the result of this is our friend the background layer, a safety net if any of the subsequent sharpening move will mess everything. Then I’ve got a second layer on top called HiRaLoAm, which used to be a masked layer with BlendIf options, that has been merged so you can now deal with it as a normal, standard and boring layer. HiRaLoAm is used to add kind of local contrast (while it’s not a true local contrast enhancer like my beloved ALCE (don’t you know ALCE?). I need just one more thing and I’ll be done.

Without any further ado, please:

Pretty harsh, maybe? No problem, since as the great maestro Dan Margulis teaches, the light halos are the most disturbing ones: you just need a way to halve them:

This way, the USM darkening halos are still there, while the lightening ones have been lowered by 50% – does it make sense to you?
The very last step is to apply a mask that cuts the effect in the background water – we may use the b channel as we did before, but there’s an alternative that may better fit our needs – or just show that there’s more than a single solution to any problem. Can you guess which alternative?

In this particular situation, we want a mask that’s pitch black in the water, so the R channel is a priori a good choice. Moreover, if you pick the R channel from a small RGB workspace, it will come already and nicely clipped in its shadows, so here: the smaller, the better. 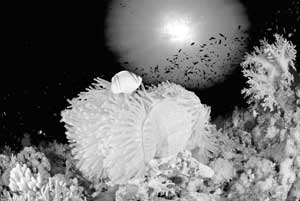 Red channel as a mask 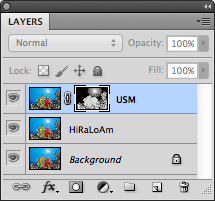 We’re happily done now! You’ve ended up with a three layers document with a color corrected background, a middle layer with HiRaLoAm targeted to the foreground, and a top layer with traditional USM, halved in its light halos, and masked appropriately. It’s been longer to describe it than to actually perform all the steps, believe me. Do you feel I went too far? You’re in good company but: No Problem, lower the opacity of the HiRaLoAm and/or USM layers to your taste – it’s always better to overdo, being able to step back.

Anyway, if you feel lost somewhere, add your question as a comment to this post and I’ll do my best to let you swim in shallow waters. 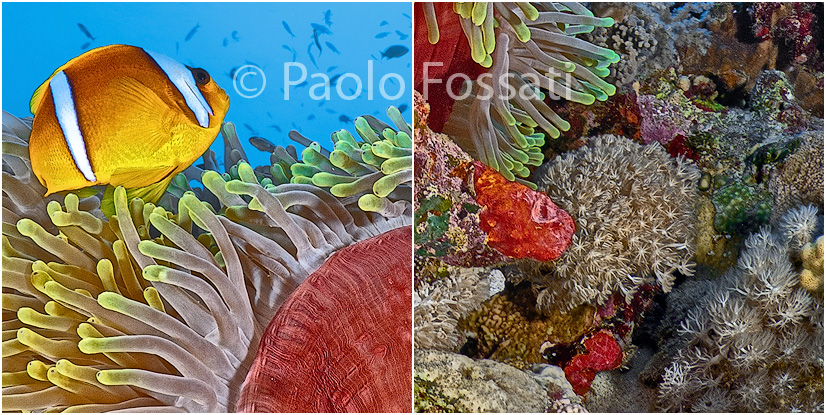 Credits
I wish to thank sooo much Davide D’Angelo for his help, and Paolo Fossati for the kind permission to show his picture. Please, do yourself a favor and visit their websites – wonderful images are there, waiting for you.