CEP 5.2 has a bug (affecting Macs with non US keyboards) that prevents AngularJS to realize binding in HTML Panels when input fields are involved. New Zealand developer Kris Coppieters has been able to find a successful way to patch Angular and make it work - with his kind permission I’m going to share the instruction.

First, what am I talking about? See it yourself with this code:

In the browser, the text input and the h2 are bound to the same ng-model, so what you type in the input area is immediately reflected in the h2, as you’d expect. First thing that you learn in Angular tutorials: binding.

Now, it happens that in Mac OSX with non-US keyboards (you can change that in the Preferences and see it yourself) the keypress / input event is fired only when a backspace is typed, so that:

The above is utterly annoying imho, and verified in several Adobe application (PS included). Kris Coppieters has been able to patch the angular.js file so that binding works again - please visit his Rorohiko Workflow Resources website as a way to say thanks (he’s an InDesign automation developer).

I’ll be quoting Kris extensively [my comments are inline in square brackets].

In SourceTree or whatever your favorite git client is, clone the repo to your local hard disk. Find the desired version - e.g. for version 1.2.15, the commit is a9b5a10, dated Mar 22, 2014. I use the ‘Jump to’ functionality [top right corned in the interface] in SourceTree to jump to the 1.2.15 label. Create a local branch from that label and name your local branch to something descriptive. The patched version of Angular will detect:

If it is running on CEP5, and it is on a Mac, then the $SnifferProvider in the Angular source code is set to avoid using the ‘input’ event. The input event is currently (December, 2014) broken, and only fires when the backspace key is hit; it does not fire for other events. Oddly enough, this seems like a reversal of the broken behavior of IE9 (which does not emit the ‘input’ event when backspace is used, whereas CEP seems to suppress the ‘input’ event for everything except backspace).

The patch consists of:

Near the very top of the src/Angular.js file, find the jsLint info for msie. Add two new variables to the list: isCreativeCloudCEP and isMacintosh. Mimic the syntax that is used for msie for these two variables: this is where version Angular 1.2.x and 1.3.x look somewhat different. Angular 1.2.x

2) Find msie in the list of variables being defined, and again add similar declarations for variables isCreativeCloudCEP and isMacintosh right behind it. For Angular 1.2.x (around line 136):

A little bit further find the lines where msie is assigned and add the following statements for isCreativeCloudCEP and isMacintosh. For Angular 1.2.x (around line 155):

In the file src/ng/sniffer.js find these lines and add right behind it a conditional. For Angular 1.2.x (around line 71):

A little bit further, find the last returned objects and add isMacintosh and isCreativeCloudCEP. For Angular 1.2.x (around line 89):

Compile a new version of Angular: you will need to install node.js, grunt, bower… I won’t explain that here - it’s a matter of visiting Angular Contribute page and the node.js web site and following instructions. Build angular as documented on the Angular ‘contribute’ page, then go into the build folder, and extract angular.min.js from the final .zip file. This is your patched version - it’s a drop-in replacement for the standard angular.min.js version that you branched off from.

Let’s thank again Kris Coppieters for the instruction so far - I will add a brief section about building Angular, which hasn’t been as straightforward as I assumed first.

Before you can build AngularJS, you must install and configure the following dependencies on your machine: Git: The Github Guide to Installing Git is a good source of information. Node.js: We use Node to generate the documentation, run a development web server, run tests, and generate distributable files. Depending on your system, you can install Node either from source or as a pre-packaged bundle. Java: We minify JavaScript using our Closure Tools jar. Make sure you have Java (version 7 or higher) installed and included in your PATH variable. Grunt: We use Grunt as our build system. Install the grunt command-line tool globally with: npm install -g grunt-cli Bower: We use Bower to manage client-side packages for the docs. Install the bower command-line tool globally with: npm install -g bower Note: You may need to use sudo (for OSX, *nix, BSD etc) or run your command shell as Administrator (for Windows) to install Grunt & Bower globally.

This has been easy, no problem to me - by the way I already had everything needed, chances are you too already rely on those tools. Things get slightly worse when: 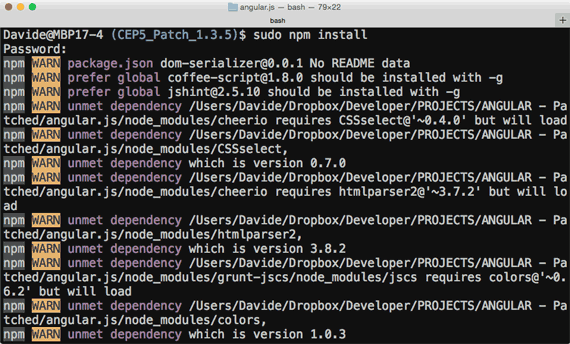 Which I ignored. No apparent problem with bower, but when it came to grunt package the command stopped because of some missing module, like: 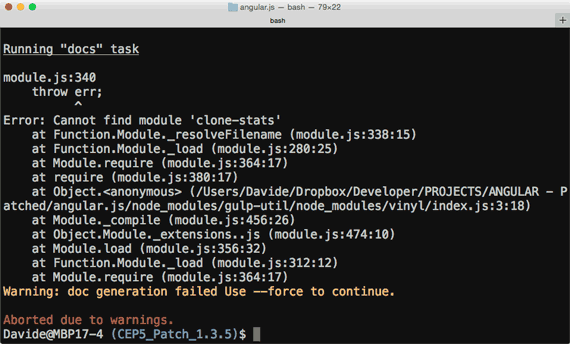 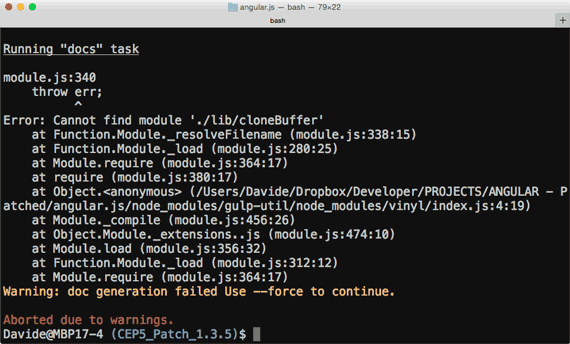 Then I gave up - by the way, this happened while running the “docs” task (which I’m not interested into), the compilation of both regular and minified version of angular.js was already done so I could grab the file and use it. And, good news, it works :-)

Are you having problems with AngularJS binding the model to an input field? Chances are you’re on a Mac with non-US keyboard (and if you’re not, your users can be). This is a known issue of CEP5.2. Kris Coppieters came up with an Angular patch that you can apply - if you’re lazy, just grab the patched version of Angular-1.2.9 and Angular-1.3.5.

If you’re reading here, you might be interested in my Photoshop Panels development – so let me inform you that I’ve authored a full course:

Check it out! Please help me spread the news – I’ll be able to keep producing more exclusive content on this blog. Thank you!