This post will describe how to setup a local Git repository, sync it with a private DropBox repository for cloud backup (as it were a GitHub hosted one) and use the Sublime Text Git plugin to manage it.

Get ready with Git

Download the latest Git version from the official website. To date, the latest package available is called git-1.8.2.1-intel-universal-snow-leopard.dmg (I’m running it successfully on OSX 10.8.3 Mountain Lion). Launch the installer, and when it’s done open the Terminal (Applications/Utilities/Terminal.app) and type which git

This is what I got, meaning that the path for the git executable is /usr/local/bin/git (or whatever it is on your machine) which is something you’ve to remember. 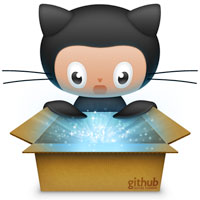 If you want (I do), you can download as well a GUI Client – providing you with a nice graphic interface. There are plenty of them, I’ll stick with the free original GitHub app for the Mac.

Depending on your skills (I’m not a very seasoned Git user, to put it mildly) and preferences, you’ll be able to drive your version control system either via command-line and/or visually through the GitHub app.

Get ready with Sublime Text

Sublime Text is a really powerful text editor (TextMate is another one I’d suggest): among the plethora of available plugins, install the free Sublime Package Control first and you’ll never regret it (installation instruction here). It will help you look for, and install, all the (other) plugins you may ever need.

Then, in Sublime Text do the usual ⌘⇧P to open the Command Palette and start typing “install” – as you type, the actual command will appear, which is Package Control: Install Package. Then look for Git and Enter to install it – visit also at the plugin official page for more information.

So far so good – yet the Git plugin isn’t working yet because Sublime Text needs to know the Git’s path (the one you’ve found before). Open with a text editor of your choice (guess which one!) the file called Git.sublime-settings found here:

And look for the following lines:

Of course be careful to type the correct path for the git_command, (recall what was the output of the which git command) then save and close (this issue is covered here).

One thing you could do (I did it – but it’s not what I’ll be suggesting) is to create a Local Repository in the Dropbox folder on your HD: here both your files and the repository are backed-up on DropBox servers. Unfortunately, this way you’re forced to keep all your dev stuff within the local DropBox folder – i.e. all your files – and this is not what you want.

As a more efficient alternative, you’ll keep a local repository in your usual development folder, then push it to a DropBox repository as it were a GitHub hosted one.

Let’s assume that your DropBox folder is ~/Dropbox and the folder where you do your development is ~/dev/photoshop. You’re going to work on a job called psProject01. Open the Terminal app.

You’ve made and initialized a bare psProject01.git repository in the DropBox folder.

This is on your usual development folder.

As a result, a hidden .git folder is created inside psProject01. Now there are two empty repos, one on the DropBox folder, one on the dev folder.

Someone is using a different syntax, but apparently the former one works too:

4. Add files to the Dev repo, Commit and Push

For some reason, I haven’t been able to use the Sublime Text Git plugin to Git: Add Current File (i.e. create a new file in Sublime Text and add it to the repo, I get this error: “git branch: fatal: ambituous argument head unknow revision or path not in the working tree”) at least until a first file has been added via command line, the change committed and the repository pushed:

The above creates a lib.jsx file and adds it to the dev repository. Then the change is committed, and the repo is pushed to the DropBox “remote” repository (which is on the HD, but it’s the same command you’d write for an actual remotely hosted repo).

Mind you, if you look into the /users/Davide/Dropbox/psProject01.git folder you won’t see any lib.jsx file: the Dropbox repository only contains the Git’s guts. If you want to double-check that everything went fine (and the file is actually stored in the Git database), you can clone the repo to a different location, for instance:

Now if you inspect the /users/Davide/dev/testRepository folder you’ll find the lib.jsx file there! Does it make sense? Articles I’ve used as a reference for these commands are found here and here.

Now start doing something with your newly created lib.jsx file, like:

You can commit with ⌘⇧P to open the Command Palette and then typing Git: Quick Commit:

Then enter a short description:

And the following is the correct output:

⌘⇧P and then Git: Log Current File shows you the commit history:

Choosing one item shows you the details: 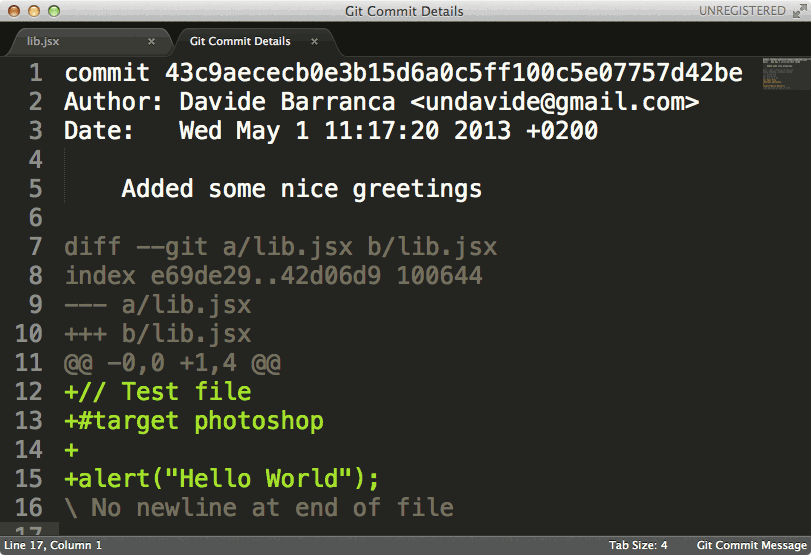 A list of supported commands is found in the Sublime Text Git plugin page.

If you feel more comfortable with a graphic user interface, start the GitHub application you’ve downloaded before and add a Local Repository (pointing to the dev folder) with the little plus button in the bottom bar: 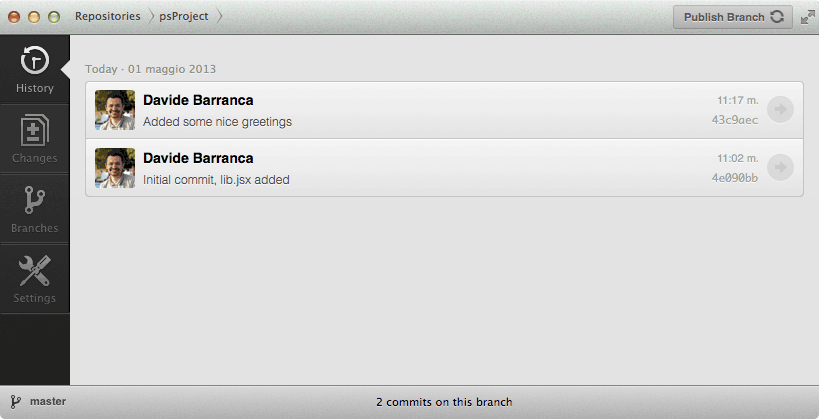 And eventually double click on a single item to view the commit’s details: 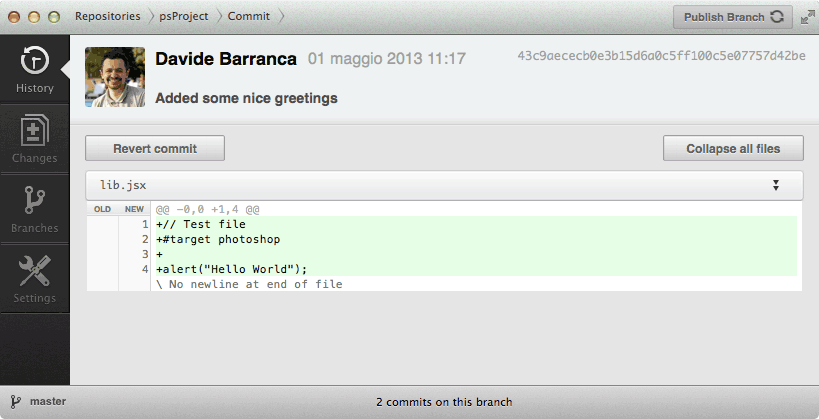 From the app you can Publish/Sync the branch, add new files, etc – the very same things Git command line allows you. I’m still finding my way around all the options, so as a very basic user I won’t suggest you anything but the initial setup.

True, DropBox sync may let you run into troubles if you and someone else are pushing stuff at the very same time, but as a single developer this won’t be a problem. Be aware, just in case you use DropBox to share your Git repository to others.