If you’re willing to produce digital books to be sold by Apple, be aware that each one of the available tools will shape your content and how it is going to be delivered in a very peculiar way. This post will cover InDesign, iBooksAuthor and the Adobe Digital Publishing Suite targeting Apple iBookStore and AppStore with ePub, iBooks and Apps. Which one does fit your needs the best? I’ll try to show you Pro and Cons from a point of view that is halfway between strategic and technical. 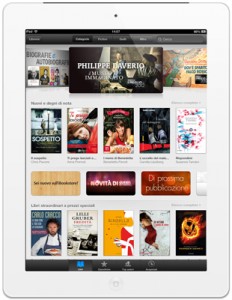 Digital Publishing is a hot topic, for a number of good reasons I’m not going into here. But when it comes to actually producing the content things get a bit fuzzy, at least this was my personal impression as I approached the subject. What format? What software? What device? What store?

If you narrow the available combinations defining Apple as the seller of your digital content (which is just a single constraint among the many ones you can choose from – a very reasonable one I’d say), the degree of freedom dramatically drops: not enough to avoid confusion and to protect you from unexpected issues.

It is where you’d assume your digital books to be sold. People who’ll get them must have, and read them with, an Apple mobile device (iPhone, iPod Touch or iPad); no, you can not consume any content on your laptop or desktop computer if you’ve bought it from Apple as a digital book. That’s the way it is, so far.
Amazon Kindle for instance is different – the reader software can be installed on a number of different devices (including the iPad and your personal computer too).

It is a standard format based on XML. So to speak, it’s perfect for text only books because you can format your content’s layout only up to a very, very basic level: that is, Title is bigger, Body is smaller, Captions are all caps and so on. If you can change the Font size in the reader (bigger, smaller) it’s an ePub.
ePub books don’t have a fixed number of pages (it depends on the Font size), images interrupt the text flow, forget about page layout: if you’re old enough to remember what HTML looked like in the early times of the Internet you know modern ePub. But you get page whirls! 🙂

Nonetheless many lavishly illustrated books end up as ePubs (I’ve bought Jeff Schewe’s “The Digital Negative” for instance), the difference between ePub Vs. traditional PDF is… huge to put it mildly – I can say it because Peachpit press lets you download both formats. 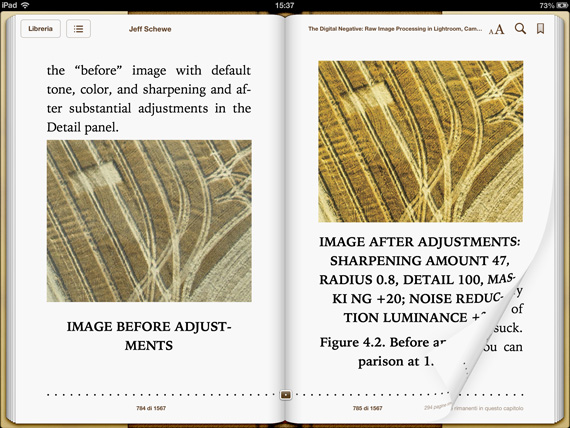 If you want to inspect an .ePub file, rename it as .zip and unzip it (for some reason OSX default Archive Utility doesn’t work – you can use the free Stuffit Expander). You’ll end up with a folders’ hierarchy with a bunch stuff with, among the rest, many HTML file, JPG images and CSS.

If it fits your needs, you can output an ePub with, for instance, Adobe InDesign, Apple Pages or even Microsoft Word – the first one being maybe a bit oversized for the job, but you may happen to already have some content in its format ready to be converted. I’ve been told from a friend of mine that runs a publishing firm in the UK (Hersilia Press) that some “post production” work (either in the HTML or CSS) is needed on the final ePub to fix small formatting issues. DRM aside, you can read an ePub that is not protected (i.e. while you’re composing it) on your PC/Mac with Adobe Digital Editions. 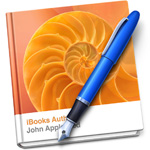 It is a proprietary format made by Apple to overcome ePub limited support of multimedia and customized layout. That is, in iBooks you can set the page layout inasmuch as you like, manage interactive content with widgets (Gallery, Movies, Interactive Images, 3D objects, etc) or write your own widget in HTML + JS. The final result on the iPad looks very like what you’d expect a real page to be, plus rich and interactive content.

Under the hood iBooks are very like ePub files with proprietary tags (yes, you can rename as .zip and unzip them to inspect’em: HTML is there as well), but they give you amazing flexibility compared to ePub. 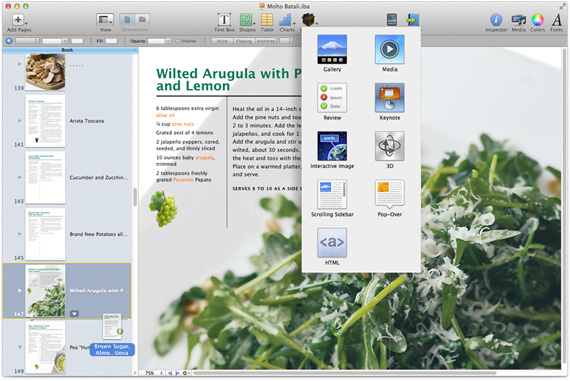 The sole choice to build iBooks is the free Apple’s iBooksAuthor (that I’ve personally covered here and here) which is a Mac only software. Speaking of which, it is very much following the style of other Apple releases such as Pages; it’s still a pretty young piece of software (especially compared to the ubiquitous InDesign) and there’s room for improvement. But it actually does what it promises, and there are several examples of spectacular books built with it in the Store.

Many InDesign professionals look down on iBooksAuthor as if it were nothing but a toy; some others say that if a toy is able to fit the needs of a large number of users that find InDesign oversized for their job (in terms of price and learning curve) and let them get where they want to get, toys are wonderful things.

This is the new player in the arena, that Adobe threw in with a lot of (deserved) expectations. Basically you work with InDesign to compose your content, provided you’ve set the project accordingly (which allows you to use all kinds of interactivity options and support for multimedia); then you gather all your content in a .folio file that eventually DPS App Builder packs into an iPad app. Being the result an app and not a book, rather than to the iBookStore you submit it to the App Store (as you’d do for, say, a game).
This bypasses completely the ePub/iBooks dilemma and makes you deliver high quality products in a straightforward way right to the iPad starting from a well known and established software such as InDesign.

Many if not all magazines (just to mention one class of top-users) have embraced DPS, also because it integrates perfectly with their existing workflow, and allows them to produce content once and deploy it almost effortlessly to different platforms (print, web, mobile).

You need to enroll in Apple’s iOS Developer Program (some extra $99), learn to manage few kinds of certificates, and you’re better off subscribing to the Adobe Creative Cloud (all the Adobe applications for an annual fee of $600 – rather than buying single DPS licenses), that is for sure the cheaper way to access DPS and publish your content as a freelance digital book author (more info about Single Edition here). I should also mention that DPS App Builder is Mac only, and you’re allowed to target also Android and Kindle if you can afford a $500 per month subscription Adobe asks for the DPS Pro edition.

The process of app building is performed remotely (that is, you upload your Folio to the Adobe servers); if you’ve some programming background, it’s just like writing your own code and send it remotely for compilation. DPS returns you with a compiled app, that, as far as I know, you can’t inspect any way. 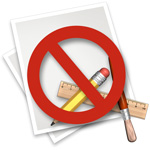 Apps can’t be books in disguise!

Whether it’s a protectionist effort or not we can’t say, but the fact is that Apple policies allows them to reject apps that… aren’t “app-like enough”! That is, if your DPS made stuff looks too much like a regular digital book, well, Apple rejects it because you should have been building it as an actual digital book (either ePub or iBooks), and submit it to the iBookStore – not to the App Store!

You could be surprised at first, but conceptually it makes sense; and after all it’s their stores and they set up the policies they like the most.
Yet it is still unclear what level of… extra interactivity makes a book eligible to be packed into an app (for sure you don’t want to reshape your book into a circus just to be able to use a cool tool such as the DPS to get to the iPad).

We’re in the early stages of (another) digital revolution – things are pretty liquid at the time, and Standards are evolving. Yet, provided that we choose to sell our digital books through Apple (either iBookStore or AppStore), the available options drop to a very small number, and in my personal opinion there’s still a lot of room for improvement – for us as freelance publishers.
The two big players in the field are of course Adobe and Apple, but their interests overlap in some ways (and this ends up as not being rather beneficial for us).

Both provide users with softwares: while Apple ones are quite cheap (Pages) or even free (iBooksAuthor) because it’s not there that they mainly look for profits, Adobe’s core business is content production tools, and such tools are priced accordingly – as it is fair to expect.
But is it fair to directly compare InDesign/DPS and iBooksAuthor? Not so, in my opinion, since they target two very distinct audiences: chances are that InDesign (a well established and mature piece of software) is going to be used by those who already knows it and/or use it in their production environment – coupled with the new great possibilities that DPS provides. While iBooksAuthor follows Apple’s strategy and is willing to be a simpler tool “for the rest of us”.
Do you need DPS extra features, may be the question to ask yourself, or more appropriately: “Can you afford the price and learning curve of Adobe’s platform?”, and “Does the final product of the DPS (an App to be sold in the AppStore, rather than a digital book to be sold in the iBookStore) fit your project?” Apple’s app rejection because they basically can’t be books in disguise (and this happens) may become a problem.

My personal impression is that, as users, we’re given tools and options (targeting Apple digital stores) that leave a big, empty gap:

The picture as I’ve drawn it (simplified, maybe) describes two solid alternatives (ePub and Apps), being the former maybe… too much low-end, and the latter maybe too much high-end in my humble opinion. ePub is frankly unsuited for anything but text only unless you’re fatally inclined to ugliness, and Apps are overkill for just books – unless you’re National Geographic or a similar big publishing firm. The middle way (iBooks) should be the right one for the rest of us (with all its Pro & Cons), and we definitely should be the majority. Yet, as it happens in business and especially with Apple, it really depends on how much a platform/system is widespread, used and well established. Digital history is plenty of promising attempts that have been pruned because they couldn’t manage to get where they were targeted to.