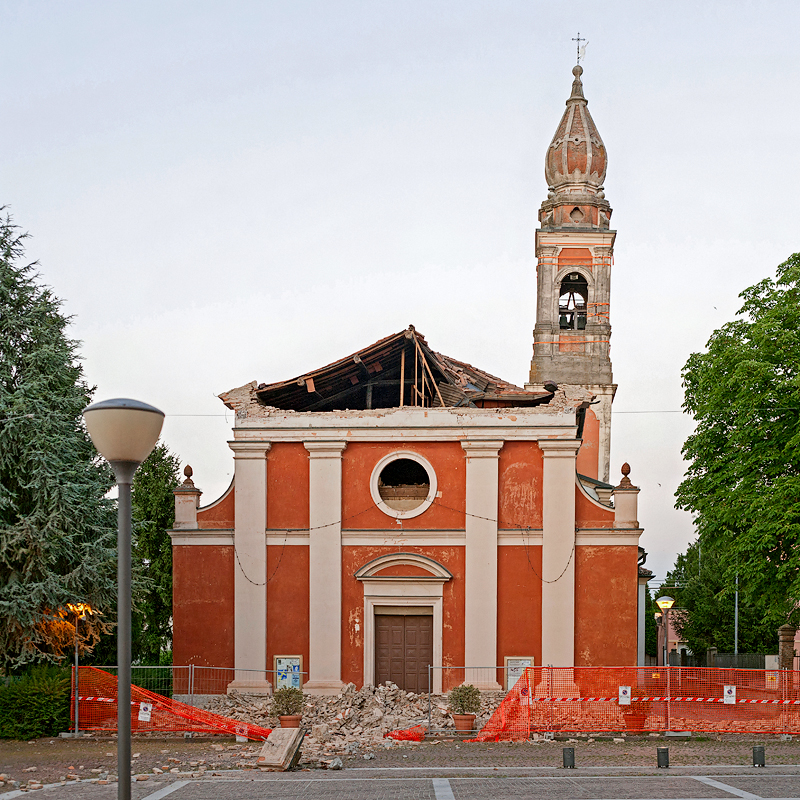 Have you heard about Italy’s recent earthquakes (May 2012) in the Emilia-Romagna region?

I did, because I live(d) some 15 Km from the epicenter: and that’s the why you’ve not found any update to the blog for some time. But this one! Read along. 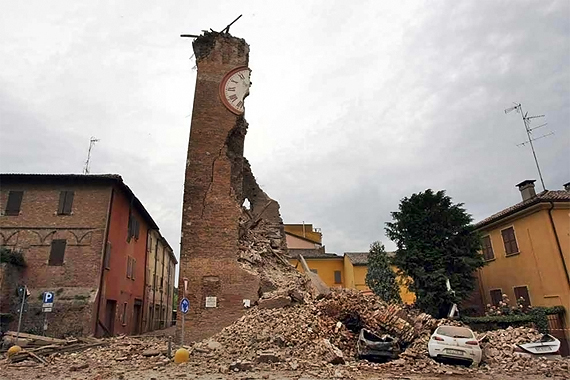 Finale Emilia (MO) – Clock Tower, 1213 (yes, the year it’s been built and after the second earthquake nothing is left)

I’m the luckiest guy: my wife Elena, my 6 yo daughter Anita and I, we’re ok (given the circumstances). Two earthquakes hit the region: the first Sunday, May 20 at 4:03 AM (magnitude 6.1 Richter) and a second one few days later on Tuesday, May 29 at 9:00 AM (magnitude 5.8 Richter), causing “only” 26 deaths but razing nearly to the ground many historical downtown’s buildings of San Felice sul Panaro, Mirandola and Cavezzo and several other small towns – houses, monuments, city halls and all the rest. Approximately +15.000 people live now in tents provided by the national Civil Protection; many other towns were severely damaged, for precaution the centers of Carpi and Cento (among others) are offlimits – inhabitants have been requested to leave their houses and barriers have been erected to prevent anyone’s access, but the police. The Army is on duty to protect the zone from looters.

Crevalcore, Porta Modena – Firemen start to gather near one of the two historical arches called “town’s door” to forbid the entrance in the downtown “red area”

Virtually anyone who lived in these districts have been sleeping outside, either in cars or tents, for days on, since smaller quakes continue to hit (+30 a day, ranging from 2.5 to 3.5, is a fair estimate; with five extra peaks >5.0 Richter). Not easy to keep calm there. 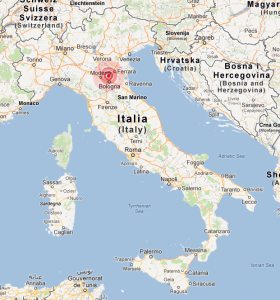 The epicenter, in Emilia Romagna (north of Italy)

The area is called Pianura Padana, a large flatland 38.000 square Km wide, with big towns lined up across the ancient roman Æmilia way (after which the region is called). All the rest is a very productive countryside for both agriculture and zootechnics (Parmigiano Reggiano cheese comes from here: americans may know its faint clone called Parmesan), with a tradition of small to medium sized companies involved in the business of mechanical engineering, connected with major automotive/bikes internationally known firms: within a radius of 50km you can find Ferrari (Maranello), Lamborghini (S.Agata Bolognese, where my wife used to work as a programmer), Maserati (Modena), Ducati (Bologna). I’ve learned that many companies involved in biomedical tech settled here too. And they’re in serious troubles now. Quoting reliable, official sources, “the earthquake damage in Emilia for the economy as a whole, according to some estimates could exceed 4 billion”. The following picture shows a Parmigiano Reggiano seasoning warehouse: bear in mind that one seasoned item (about 30Kg, diameter 40cm) is sold for about 400 Euros (approx. 500 US Dollars), what you’re looking at is millions of Euros of damages. And it’s just one warehouse, there are many, many others. 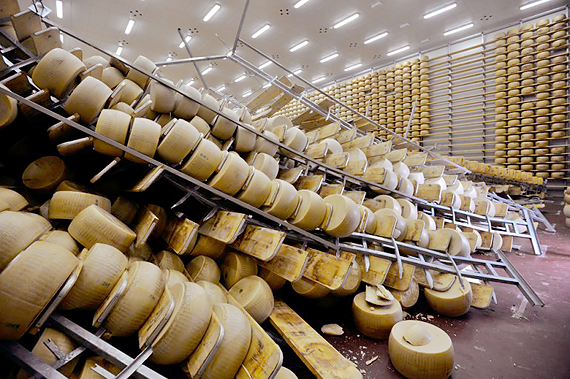 The epicenters are (obviously) lined on one of the geological faults that cross here, due to the pressure caused by the Alps and the Appennins, the two mountains chains of Italy. Yet the landscape seems a very calm one, for the flatland is the result of thousand of years’ sediments brought there from the longest river in the country, the Po, ending in the Adriatic sea.

According to some engineers, the earthquakes danger index of the area has been kept low since the last world wide war, to promote post-war reconstruction – as a result, an impressive amount of new buildings (have a look at this impressive picture from INGV) caved in as well as ancient structures, for they’ve been erected following loose anti-seismic building rules. Now it seems they will raise it again. A strange, unusual phenomenon happened here as well – the so called “ground melting”: basically, if a layer of fine sand lies on the top of a water bearing stratum, the earthquake would push the water through the sand layer, causing a mud flooding – right from the bowels of the earth. Many houses has been found filled with half of a meter mud layer – which is a bad sign: this means that the underground is now kind of empty and cannot support the weight of the building anymore – it will, slowly, subside. 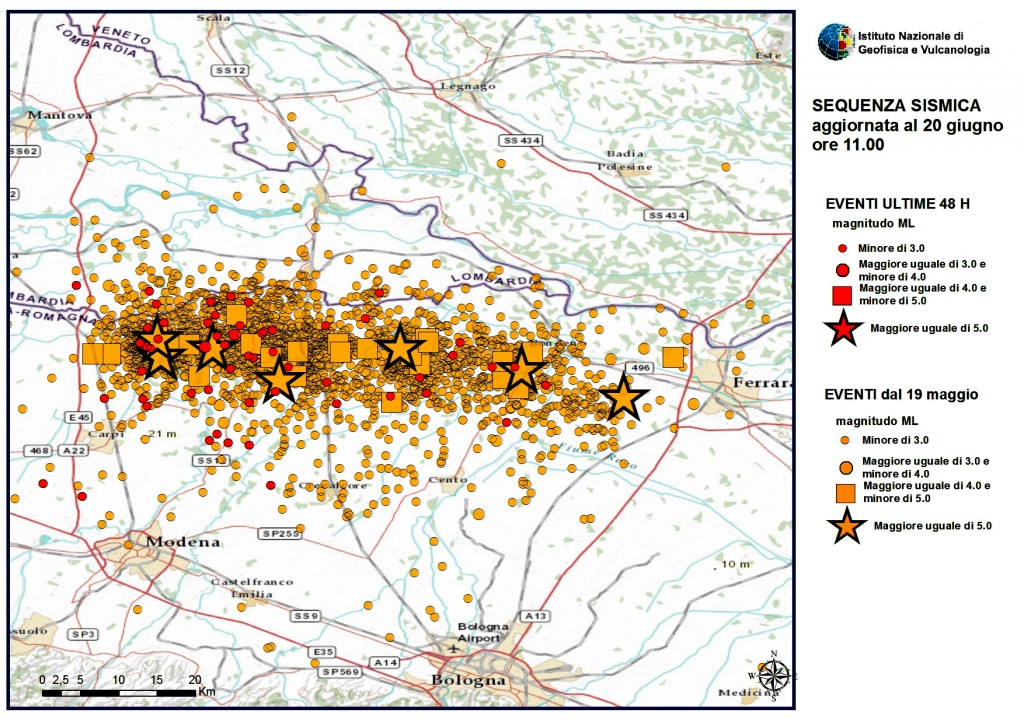 The first quake came so early in the morning (4 AM) that almost nobody has been injured in churches and/or industrial structures – strange as it may seem, the darkness helped a lot: not to see your house vibrate on waves coming from the ground is a bliss, even if glasses, dishes, bottles and all the rest crashed on the floor. My dear hardware calibrating Quatographic IP213 monitor fell from the table to the ground too, but hey, it’s German made and worked flawlessly anyway.

Quatographic Monitor, twice earthquake survivor championship winner – pack your things and displace them in a safer place, hurry up!

The second, stronger quake, on the contrary, came 9 days later, late in the morning and killed workers and people doing their daytime business: I was driving my car and felt clearly the vehicle swinging on its left-right axis and I almost lost the control. This time children were at school (like my daughter Anita – who, she said, has been caught by the earthquake while she was just sitting on the toilet) and my wife reported that she couldn’t exit the garden facing her cousin’s house because “the small gate was vibrating so badly that I couldn’t find a way to run through it”. Few hours later a couple of strong quakes hit again and I confirm that to see a big tree swinging that way is truly impressive. My dear Quatographic monitor fell on the ground one more time: hat off to Germans, it shows the very same small deltaE on colors that made it an Ugra/Fogra certified display for critical color work – I feel like it’s had its own fair share of crash tests so I finally moved it to a safer location. Not surprisingly, the Drobo (being so bulky) didn’t even shifted on the table.

To undergo a second earthquake just 9 days later, when people started to recover from the shock, has been a big trauma for everyone. Almost nobody is sleeping inside a house, but in tents (even right now, a full month later).

Buildings that did suffer the first quake collapsed, turning our towns into so-called, uninhabited, “red areas”. More than 160 schools are closed waiting for repairing or demolition. The latter case is the one of the primary grade Anita would have started in September: it seems that containers will be the solution for the next one/two years, then… we’ll see. And this is the fate shared by many other buildings, so damaged that repairing is not worthy at all: will they be reconstruct? The social structure of many small towns rely on this answer.

We moved to Bologna, in my mother in law’s house. Since, as we say in Italy, tragedies never come alone, my wife’s mother died the very same night of the first earthquake, after months fighting a cancer: since January 2012, my wife lived with her, while my daughter and I we stayed in our house in the countryside, meeting just in the weekends – so each one of us has had his own share of work. Me, as a full time working dad (bring Anita to school, take Anita to the pool, feed Anita, clean the house, wash the dishes, fill the washing machine, do pre-press, find the cats, etc), her as a full time caregiver. 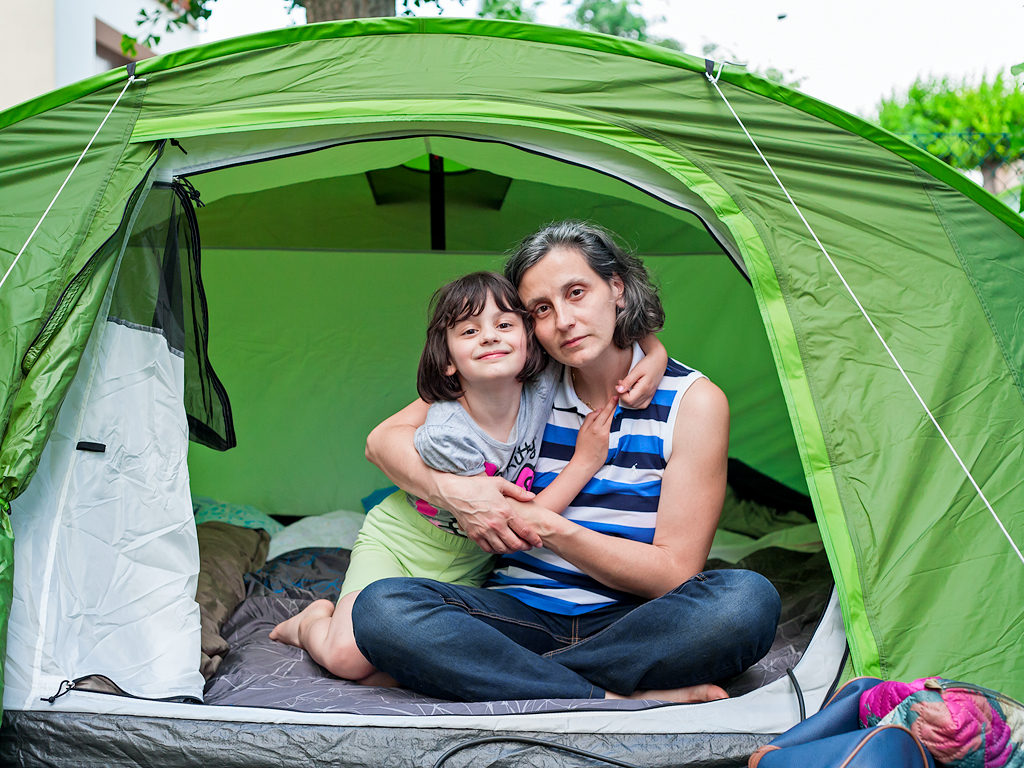 Anyway, as I wrote: given the circumstances, we’re ok. We’ll have to face tough times but it could have been much worse. I’ve had a couple of big jobs to work on, a week of vacations on the Alps is already booked, we just don’t know what to do with our house (we were starting some big restoration – of course everything is on standby now, and we’re wondering whether it’s worth or not to start restoring at all; to sell the house is not an option, since the real estate market in the area is… well, you can imagine). I hope to update the blog with more happier posts in the future… but I had to write this one. Ciao!!

PS
If you’re willing to contribute, this is the fundraising page for schools in Crevalcore. And here are some other pictures I took around in my village, Caselle di Crevalcore. 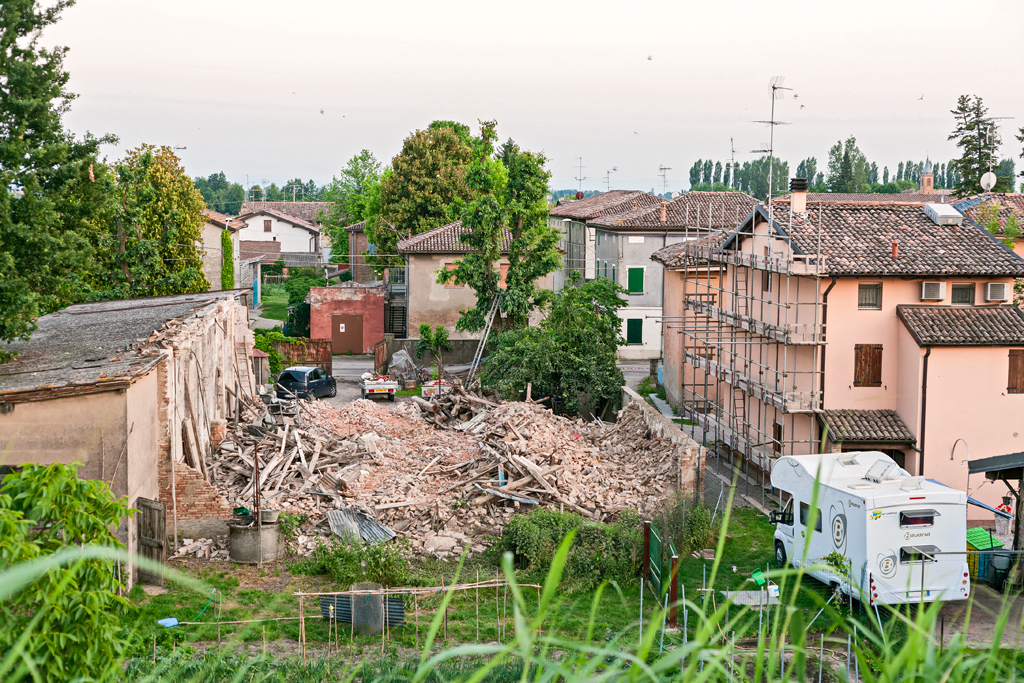 Collapsed building in Caselle – as seen from the Panaro river’s bank (click to enlarge). 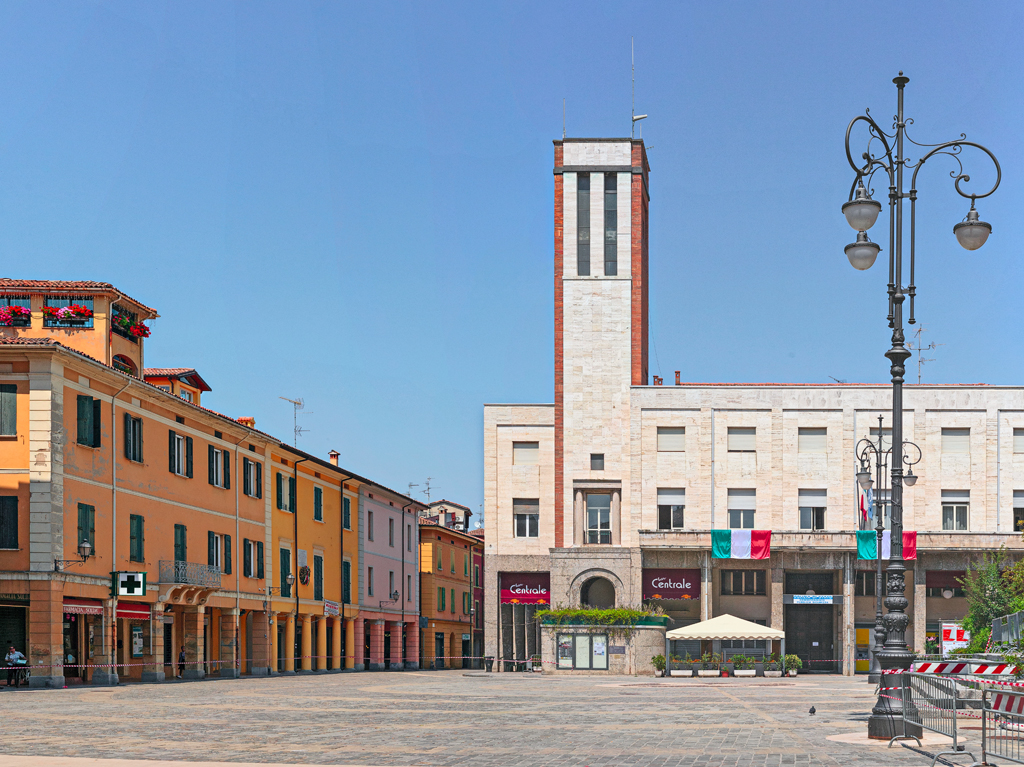 An empty, central square in the town of San Giovanni in Persiceto – the days after the first earthquake almost every store, bar, shop, office was closed. (Click to enlarge) 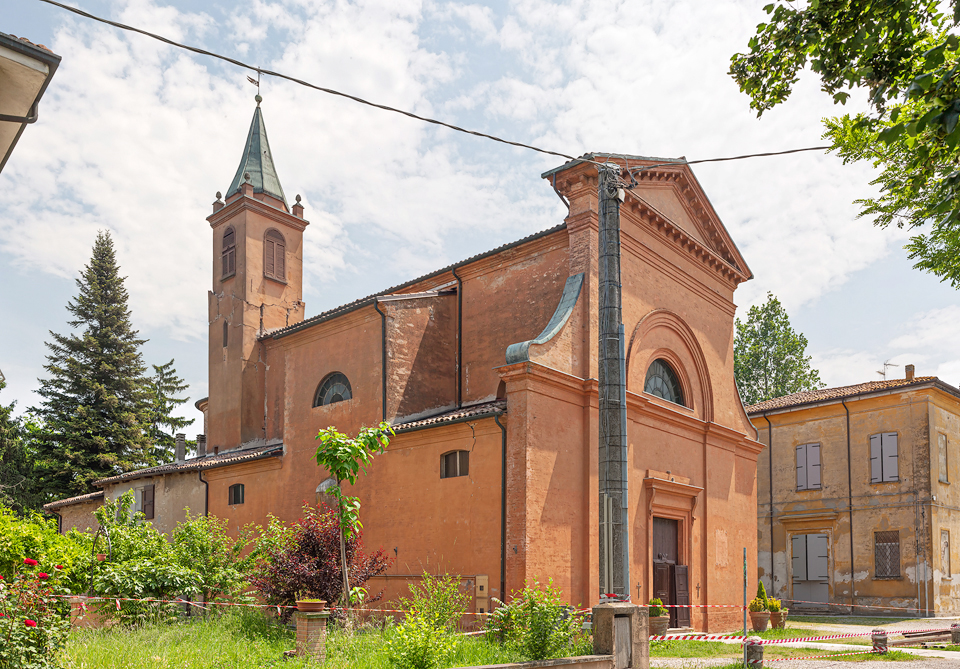 Caselle’s church – after the second quake the belfry was irreparably damaged, forcing the people living in the building nearby to quit their house: it could come down right on it. Inside, one column fell on the ground ripping the roof open, and a long crack running from one side of the church, across the whole roof, to the other side, suggests that the facade is basically detached from the rest of the structure and it risks to bend forward and simply fall – as a result, the road has been closed to the traffic, splitting the village in two. (Click to enlarge)

Caselle di Crevalcore – what the belfry looked like on May 20 (1st earthquake), May 29 (2nd earthquake) and the following days. The whole church will probably share the same fate – click to enlarge.